Daria Deflorian and Antonio Tagliarini are two performers, writer and directors who, alongside their own personal works, have embarked on an intense and regular collaboration since 2008.

Their first such collaborative work was Rewind, A Tribute to Cafè Muller by Pina Bausch created in 2008 for the Festival Short Theatre of Rome, which subsequently toured various Italian and European festivals. In 2009 they co-wrote, directed and acted in their own production called From A to D and back again, loosely based on Andy Warhol’s similarly titled book for the Palladium Theatre in Rome. Since 2011 they have worked on Progetto Reality (‘Project Reality’) which has morphed into two works: czeczy/cose, (‘things’) an installation/performance first performed at Rome’s Festival Short Theatre in 2011 and Reality, which was commissioned for the Festival Inequilibrio di Castiglioncello in 2012. In Autumn 2012 they were invited to take part in the Teatro di Roma’s ‘Perdutamente’ project which led to their play Ce ne andiamo per non darvi altre preoccupazioni (We’re Leaving So You Don’t Have To Worry Anymore) in December 2012. This work constituted the initial study of a production which premiered in November 2013 for the Festival Romaeuropa where they were joined on stage by two other co-creators/performers Monica Piseddu and Valentino Villa. This play won the Ubu Award 2014 for Best New Italian Dramaturgical Research.

Three of their texts were published by Titivillus 2014 in one edition called Trilogia dell’invisibile (Trilogy of the Invisible). A retrospective of their body of work was then performed with the same title in November 2014 at Teatro India in Rome. In Autumn 2015 Daria and Antonio presented both Ce ne andiamo per non darvi altre preoccupazioni and Reality at the Festival d’Automne in Paris.This also marked the beginning of an international tour through France, Swiss, Germany and Canada.

Il cielo non è un fondale (The Sky Is Not a Backdrop) had première in Théâtre de Vidy in Lausanne in November 2016, and continues their research on the relation between the figure and the backdrop, personal and collective history.

Their next project, inspired by the film Il deserto rosso of Michelangelo Antonioni, took the shape of a show for five performers, Quasi Niente (Almost nothing), which has premiered in October 2018, and a performance for non theatrical venues, Scavi.

In 2020 they première their adaptation of the italian translation of the text Who killed my father by french writer Edouard Louis, an they start working on their new project inspired by the film Ginger e Fred of Federico Fellini, which will outcome in 2021 in a duo show, a show for six actors and a documentary.

Following on from a period of work inspired by Red Desert by Michelangelo Antonioni, the new piece by the Italian duo is so fond of, once again tackles a monumental figure of Italian cinema: Federico Fellini. Here, they take their inspiration from his film Ginger and Fred.

At the end of the film, Amelia says to Pippo : « I don't think we will have the chance to dance together again». The performer duo takes this sentence in the opposite direction by prolonging the research they initiated in Quasi niente (Almost nothing) on the common thread which unites different generations, opening up a space for hope in the process of transmission. Here, a performative and danced conversation is played out between three couples, in their thirties, forties and sixties, respectively. In a short space of time, the piece invites us to perceive them as one and the same couple which, over the course of time, dialogues with past and future moments in its life. These temporal shifts exude a soothing, quite disturbing atmosphere never far from the land of dreams; the latter were always a rich source of inspiration for the great film-maker himself, drawings of which he made until his dying days. In search of this residue of purity which turns into revolt, powerless though it may be, in the case of Fellini's two characters, this piece is an ode to the couple and the energy of dialogue, the latter giving us the possibility of moving forwards together.

" Quasi niente: the starting point of our new project is Il deserto rosso – Red Desert Michelangelo Antonioni’s 1964 remarkable first film in colour, apparently (perche SEMBRA?) based on a short story by Tonino Guerra and featuring a heart-wrenching, child-like Monica Vitti. She plays wife and mother, Giuliana who crosses the ‘desert’ – in one distinctly red scene – at a time in her life when no-one can actually touch her and she never touches anyone either. Even her encounter with Corrado, her husband’s friend, in many ways like her, can change anything. The sparse dialogue, some so awe-inspiring it was adopted into everyday speech (“My hair hurts/Mi fanno male i capelli” being the most famous – ‘borrowed’ from the Poet Amelia Rosselli) together with the landscape, an area of Romagna around Ravenna transformed by the director (‘painting reality’ was his comment on this work) all contribute to an ailing, yet beautiful world where the short circuit between the senses and the question ‘does this make sense?’ can still astound us today. It is a ponderous subject, viewed, discussed and already thoroughly explored.

Unlike Janina Turek the main character of our 2012 work Reality, or our Greek pensioners, other characters borrowed from Petros Markaris in Ce ne andiamo per non darvi altre preoccupazioni in 2013 (We’re Leaving So You Don’t Have To Worry Anymore); real-life ‘subjects’ who were barely considered, if at all. However Il Deserto Rosso is one of those pivotal films – critics agree – not only for Italian or International film but for Twentieth Century Visual Arts.

We chose to be five actors on stage: three women, two men. Firstly to avoid that bourgeois wife-husband-lover triangle and to be free to work on Giuliana’s character and lastly, to find our very own way of responding to the film’s anti-realistic tensions. We also found this work engaging because the plot is not the whole film and we both identified and felt at home with this approach.

We have always been inspired by so-called ‘secondary characters’, the demure (those “fire-flies” present both physically and in thought and so beautifully described by Georges Didi-Huberman) and always describe ourselves through their personal failings and downfalls. As such these figures seem far-removed from Antonioni and his bourgeois settings. In reality, Giuliana totally belongs to that same spectrum of half-formed, twisted people; she’s like a ‘wild woman in elegant clothing’, her own take on Kaspar Hauser. Something about her reflects a quest for truth similar to what we often lose, in our attempts to fit in. We have adapted. Settled as such, we silence her self-questioning: “What am I supposed to do with my eyes? What should I be looking at?”. Our work is not solely focussed on unease, fragility, cracking up, but would also like to explore those child-like qualities in her that the world has become deaf to, and disinterested in. " 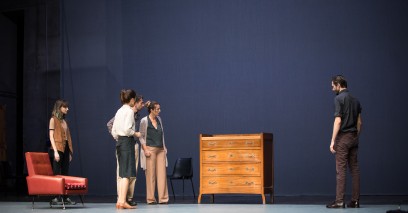 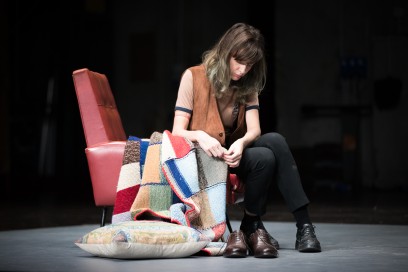 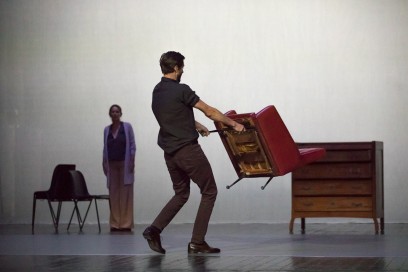 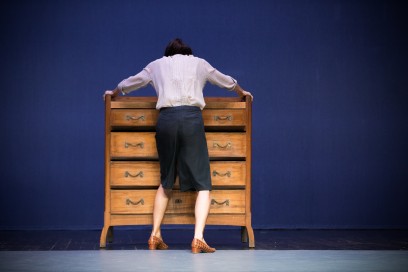 Scavi is a collateral work to the previous Quasi niente by Daria Deflorian and Antonio Tagliarini, inspired by Michelangelo Antonioni’s movie The Red Desert. The duo here provides the audience with the “findings” of their visit to the Antonioni Fund in Ferrara, from their extensive reading of all the papers and materials related to the making of the movie, such as the diary of one of the Assistants to the Director, or the handwritten thoughts by Antonioni or viewing the photos of cut scenes, absorbing the creative process, the marvelous and strenuous clash between idea and matter. 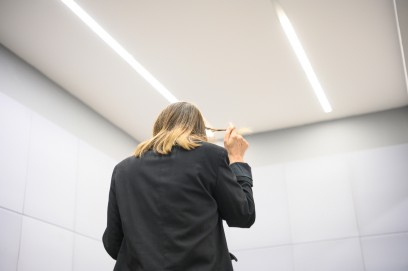 Collaborating for the first time as directors instead of dramaturgs or performers, Daria Deflorian and Antonio Tagliarini stage the last autobiographical novel by Édouard Louis, the young French writer and intellectual who became a great publishing success in France and who, with strong and effective prose, gives a scorching and impassionate analysis of the the class struggle, of the relation between dominated and dominants. Performed by Francesco Alberici, Chi ha ucciso mio padre is a dialogue for single voice, a “letter to the father” in which a homosexual son delivers the father, haunted by masculinity and by the knowledge of being himself an outcast, to premature death – a death caused by the laws and the rules of a form of power which is no longer considering the lives of the people they eject when they get in the way. 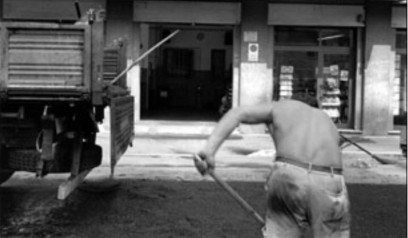 In a daily gesture of survival that lasted almost half a century, a Polish woman named Janina Turek that became a habit and Janina wrote down wrote in notebooks the calls she received, people she met by chance, evenings at the theatre, meals eaten, letters sent. One day in 1943, she saw her husband led off by the Gestapo. Stupefaction. Shock. To cope with the passage of time, she wrote down everything that occurred in her life. That astronomical amount of data offered the Italian artists Daria Deflorian and Antonio Tagliarini material for a wonderful inquiry into ordinary life.

748 notebooks. The inventory of a lifetime. On an almost bare stage, a search for truth appears in the guise of a portrait of this woman, a deeply moving evocation. From the anonymity of a simple, unpretentious existence emerges the voice of dignity, delicately unique and imposing. Sharing with Janina the stubborn desire to illuminate reality, Deflorian and Tagliarini entrust to the theatre this impossible archive of the self that, while part of historical events, also slips from their grasp. 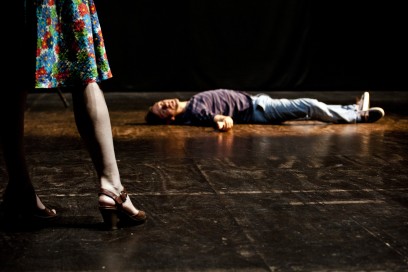 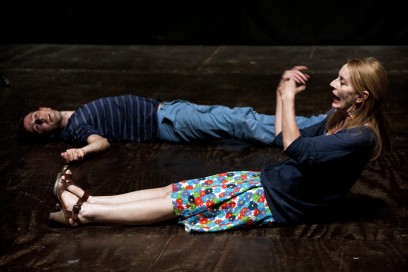