Holder of a Master's Degree in dramaturgy and dramatic writing from the University of Provence specialised in stage direction, Geoffrey Coppini first wrote and directed his own plays Gross (2006), Seules (2007) and Luxe (2008). In 2007, he staged L’énoxe by Frédéric Schulz-Richard and Dragage by Jean-Paul Quéinnec during actOral 8 (International Festival of Contemporary Arts and Writing) for the Centre National du Théâtre. The same year, he was in charge of programming artists for Rencontres//02, a Platform for young European artists and works via a residency on the theme of the social body with Marion Abeille and Paulo Guerreiro.

In 2010, he created the play ACTE Vegas by Liliane Giraudon during actOral 10 and staged Ravissements by Ryad Girod during Rencontres à l’échelle 5.

He is currently preparing the creation of The Pelican by August Strindberg, and Autopsy planned for Les Informelles festival, Bernardines Theatre.

LAST Cie, a company from Marseille with a European scale.

It is also involved in the educational field and the development of audiences, implementing actions for children and teenagers, raising art awareness in schools of the PACA Region in 2008 or in collaboration with the Institut de l'Image of Aix-en-Provence in 2010.

The company stands up for a theatre which challenges genres (literary) & genders (identity). Questioning the role of actors, their relation to the body and text, whether it is contemporary or classical.

The father is dead.
The mother is suspicious.
The two children have a plan: run away.
The daughter's plan: getting married with Axel
(The daughter is sterile)
The son's plan: Studying law to sue the mother
The attempted running away fails:
Axel is the mother's lover
No more money for the studies
Back to square one - the escape will not take place
In the end, the house will be on fire.

When everything is doomed, we are only left with laughter.

I have been interested in August Strinberg for a while, in his plays, his letters, his drawings… it might be because in his work female parts are always in the foreground, staging intense and devastating beings.
Here, further to the father's death, the mother finds herself confronted with the outcome of her upbringing based on economy. Her two children now grown up cannot but blame her for her lack of warmth.
Recently married, the daughter comes back from her honeymoon with her husband Axel, who is actually the mother's lover; a self-interested lover who breaks away from this family as soon as money starts running short. As for the children, they set their house on fire to put an end to misfortune.
As regards the set, we are opposite a square… as a metaphor of home. This house where the children have fun could also be the table where the family gathers together, a place where to find food, to chat, to share… Yet, in the Pelican family, this does not exist. This lighted Square will be turned into an autopsy table for this sick family.

Beyond the drama, there is the underlying humour in the face of a merciless fate, close to vaudeville and the secret lover hiding in the closet. The stress lies on these children whose escape plans fail.
The son studies law before dropping out for lack of money. He will not be able to sue his mother.
The daughter gets married so as to escape the house, a marriage to heal the past, alas it will bring her back to square one: her husband wants to live under the same roof as his mistress. The son would gladly get rid of this brother-in-law/stepfather, but fascination keeps him from moving.
As the escape plans have failed, no future is possible. When one cannot run away, the enemy must be killed, that is what they'll do when setting the house on fire… but they will stay inside.

For this flagship project by Marseille stage director Geoffrey Coppini, who confronts himself for the first time to a "classical" text through the words of August Strindberg, we have chosen to monitor the production management through organising residences and assistance in disseminating the show. 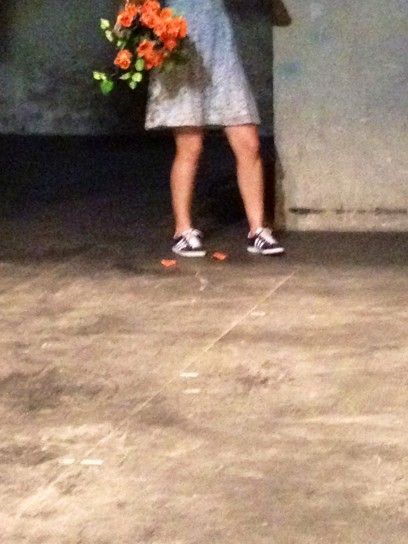 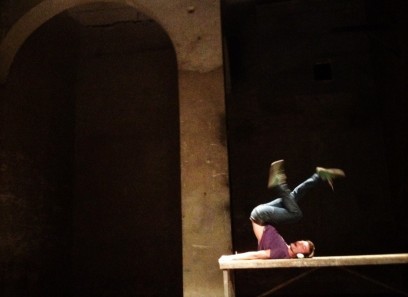 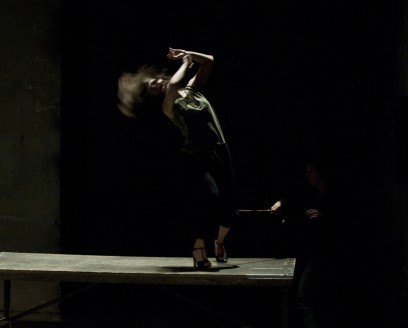 The actress tells us about important parts. She will be Phaedra, Thelma without Louise, a Hitchcock heroine...
While practicing before our eyes Ibsen's mythical character, Hedda Gabler, she is full of promises.
She passed an audition for the play Hedda Gabler staged by a young contemporary stage director, who decided to put up Hedda Gabler without Hedda.
He will design a tailor made part, that of Diane, a character briefly mentioned in one line but who, for artistic reasons, becomes a central character of this adaptation.
Gradually the actress practices, gradually she opens up, changes.
Who do we see, the actress or her part?
Who is the coroner? Tesman? Lövborg? The white-shirted actress's lover?
In one sentence, she switches the set and, as a result, her partners' parts.
What she promises, it's a beautiful finale.


What started as a commissioned piece (designing a performance where I would be doing an actress's hair on stage) turned into a project which concretely connects my two jobs: stage director and set hairdresser.

This piece focuses on the questions that usually pervade my work: that of making the human aspect disappear behind the monstrous and the other way around.
The transformation no longer occurs before but during the performance. I have always tried to reveal actors running after their roles.
Through the actress's physical transformation, by adding layers of make-up and hairstyles, she becomes a stranger. The human figure disappears gradually to let a creature appear: that of our theatre and film memories, our dreams and fantasies.
A coroner draws and sculpts the outline of this woman, gradually confusion steps in... 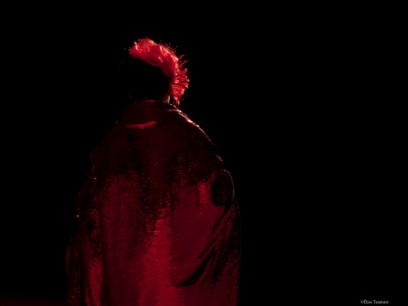 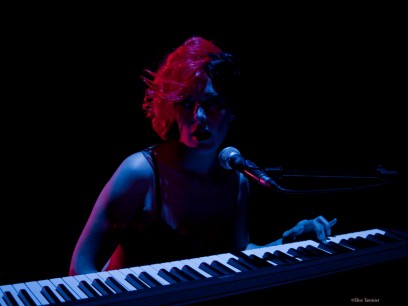 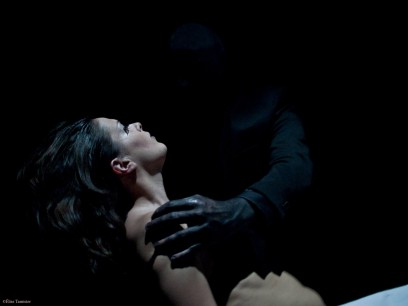 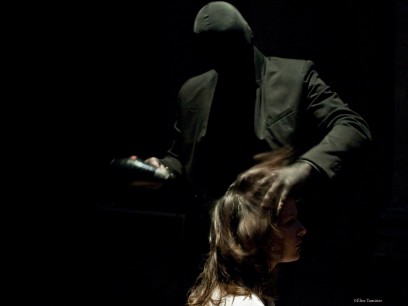 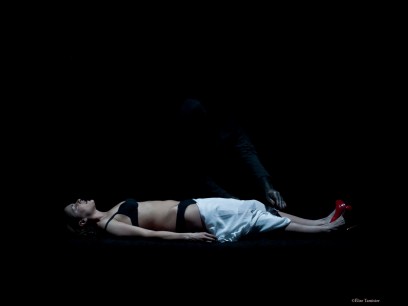 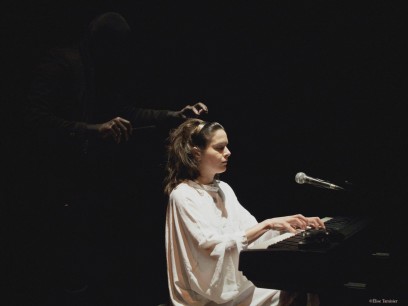 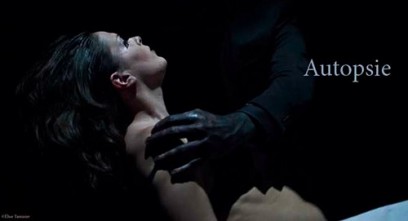